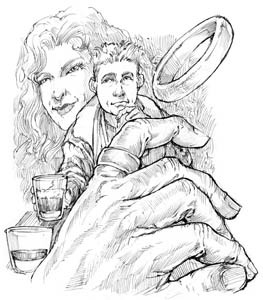 "Leprechauns are a tricksy sort."
To read more of "The Good People" click here. 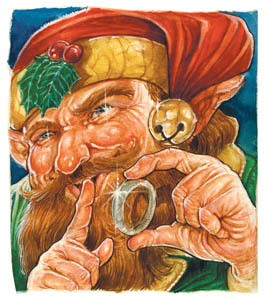 Wren was not going to spend another Christmas like the last one, when he'd wandered from the Cozy Diner to an early matinee and then home to his empty apartment. Not this year.

This year he had the jump on things. He'd gone on the Internet and found a good deal on a flight. He chose Ireland because he'd overheard Kelly, the pretty receptionist at work, telling a friend in the break room that she loved Ireland. It was just luck to learn the city of Cork, on the southern coast, was this year's European Capital of Culture. That meant he could tell Kelly that the Irish were going all out on their celebration, with specially planned arts, music and a thing called Solas, the Journey of Light.

He took three weeks off work, which made the trip appear more a vacation than an escape, and bragged to his coworkers about the series of tickets he'd already purchased to various international-sounding events. Only to Kelly, who'd recently begun appearing in his dreams (lusty and malleable!) did he mention the rings. Eighty-five hundred stainless steel rings, he told her, were being made by Irish artists and handed out during the Solas. A recipient was then obligated to perform some prescribed act when he met another ring bearer on the street.

"They're creating spontaneous art!" said Kelly, who was just then at the filing cabinet, squatted down to stuff some bit of paper in the last drawer and her small skirt rucked up to reveal brown thighs. "The streets will be their stage!" Her words held a lilt as she straightened. She had a melodious voice and was studying dance and acting in night school. Sometimes, in his dreams, she even sang to him.