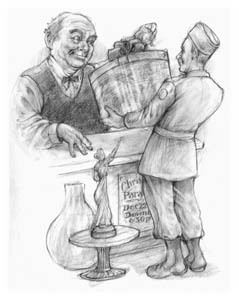 Click here to read the complete story "The Christmas Box" 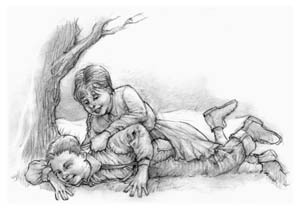 Erich is dreaming about snow. Great long shrouds falling and falling in snow's deceptively gentle way, Lucile clapping her gloved hands while flakes twirl around her bundled head until they appear to fall up. She's asked him to come sledding.

Although in reality Erich is an old man, in the dream he's a boy again, ten years old, who hates snow for the extra ranch work it creates. Hates it until the moment Lucile removes her gloves and stretches out her hands, and he sees the flakes dancing on her bare palms, looks at snow anew, and finds it magic. Just like that, he's fallen in love with Lucile.

His grandson Kenny is spending the week before Christmas, and Erich has taken him into the attic looking for Christmas decorations, lugging the dusty footlocker back down to the front room together. Something for the boy to do. Kenny is four and still pleased by things such as Grandpa's old treasures. Like some miniature explorer from a far-off land, he attacks them with heart. So while Kenny hunts through the locker Erich has fallen briefly asleep on the couch and had the dream. A good dream, but with an undercurrent of worry. He wakes to Kenny shaking his shoulder, his tender face up close.

His grandson is holding the Christmas box.